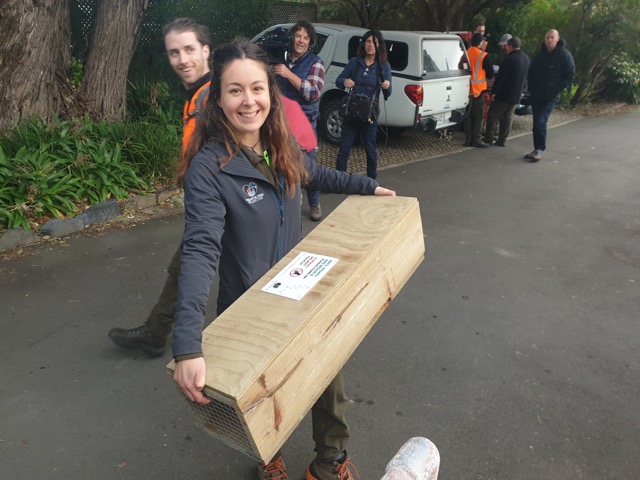 Predator Free Wellington is a 10 year project aiming to make Wellington free of rats, possums and mustelids. The first stage of the eradication project is focused on the Miramar Peninsula.

James Willcocks, Predator Free Wellington’s Project Director said: “It is the first time an urban eradication has ever been done at this scale, it’s definitely the biggest urban predator eradication the country has ever seen.

“There are about 20,000 people living on the peninsula and our team has spent the first part of this year speaking with them. Incredibly we now have almost 3,000 households and businesses hosting a bait station or trap on their property,” said James.

Wade Hammond of Strathmore is one of the residents who has agreed to help. As a regular trapper in his backyard and local reserves, Wade said the birdlife on the peninsula has exploded recently, we’re noticing heaps of tui, kereru around, even korimako (bellbird). “It’s amazing to think we’ll be rat free by the end of this year,” Wade said.

“Having such a huge amount of support from the community effectively means we now have a team of thousands, and it means we can achieve zero predators relatively quickly,” James said.

“By the end of this year, 20 December, we hope to have a Christmas present for Wellington – a peninsula with zero rats, stoats, weasels and possums.

“Achieving our goal of zero so quickly is only possible because we’re not starting from scratch, we’re basically here to finish the job. The peninsula is already possum free, this is thanks to the great work done back in 2003 by Greater Wellington Regional Council and Wellington City Council.

“We’re also building on the work of Predator Free Miramar community trappers who have been trapping on the peninsula for the last two years and have made a huge dent in the rat population, catching almost 5,000 rats to date,” James said.

Dan Henry is leading the community group Predator Free Miramar. Dan said our community is really excited about this project.

“People are sharing pictures of karearea and ruru in their gardens, and requests for our backyard traps have gone through the roof in recent weeks as people scramble to get involved,” said Dan.

“In a year where the rest of the country is seeing record high rat numbers, Wellingtonians are working together to create the world’s first predator free capital city,” said James.

“We are working on a complete eradication model, which will make Wellington safe for our native wildlife, and it starts with backyard trappers. Every trapper, every resident, can help create this world first for Wellington, a capital city where our native wildlife can thrive, and will ensure seeing kākā, tui and kākāriki in our backyards is normal.”

“Once we reach zero rats, stoats and weasels on the peninsula, we can take what we’ve learnt and look to spread the success formula into Island Bay and then the central city, and in successive waves north to Porirua,” James said.