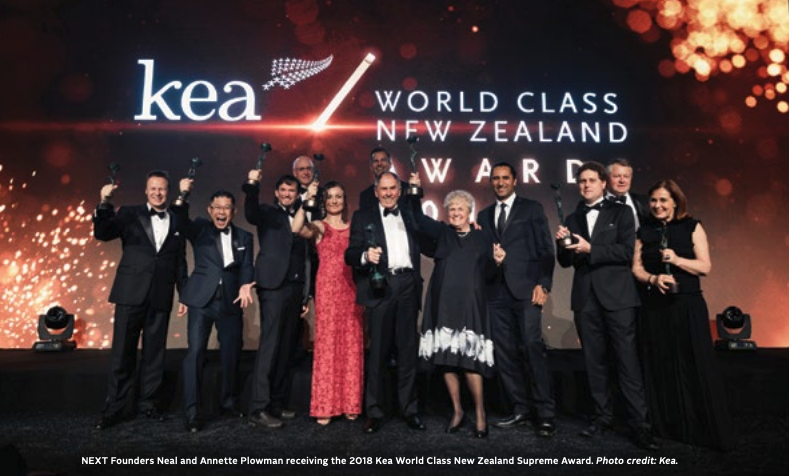 Being recognised with the 2018 Kea World Class New Zealand Supreme Award was a timely reminder of the generous charitable contribution Neal and Annette Plowman have made over many decades, most publicly with the NEXT Foundation.

For Annette, however, the award was also an opportunity to use a rare public appearance to remind others of the potential rewards of large scale strategic philanthropy – specifically, that those in a position to do so consider giving away half of their personal wealth in their own lifetimes.

She acknowledges that “giving while living” is a challenging idea. “But I also think the reason that we decided to “come out” was because of NEXT. It wasn’t about us. It’s about our Foundation and all the projects it’s doing.”

From the outset, the guiding philosophy behind NEXT has involved a combination of factors – establishing a fixed life for the fund, a desire by the Plowmans to see tangible results from the Foundation’s investments, and a vision to spread the good word about the impact strategic philanthropy can have so that other individuals or families might do the same thing.

Having been successful in business, Neal explains, there came a time when personal and family needs were no longer an issue, but the needs of community and country loomed larger. “Now we’ve got to a point where we have more than we need, way more, and we’re happy to get into bigger projects and take more risks.”

While NEXT became the ultimate expression of Neal and Annette’s philosophy, their philanthropy began long before its establishment. Initially, wanting to maintain their own privacy and not be perceived as seeking credit for their philanthropic work, they funded projects anonymously through a charitable trust administered with others – Barrie Brown, Chris Liddell and Geoff Harley (as well as Neal himself).

Using this structure the Plowmans donated to some great organisations – including Lifeline (with whom Annette had been a counsellor), The Salvation Army, the Auckland City Mission and The University of Auckland – that they felt were doing vital, important work.

Over time, however, it became clear there was a niche the Trust could target – larger scale catalytic projects requiring not just money, but governance and management support too. Given the wealth of business experience and expertise among the trustees, plus their ability to help build capacity and offer strategic guidance, why not evolve to harness those non-monetary assets?

The first project to suggest the new approach was Rotoroa Island, for which the Trust funded a long-term lease from The Salvation Army to design and implement a conservation plan. It involved a departure from the Plowmans’ earlier approach, calling for hands-on involvement. When the Trust took on Project Janszoon in Abel Tasman National Park, a significant partnership with the Department of Conservation, it confirmed that the scale and complexity of this kind of philanthropic work would require greater structure and dedicated resource. The seeds of NEXT were sewn.

With Neal and Annette now wanting to take a step back from direct decision making, as well as maintain their cherished privacy, Chris Liddell proposed the establishment of a foundation to take over the original Trust’s work. He based his thinking on some deep research and reading around best practice in the field of strategic philanthropy, primarily in the US.

In short, good philanthropy involves the same principles as good business – clear goals and targets, planning and accountability, harnessing networks and, most of all, great people. As Neal puts it, “If you’re going to run an organisation, you have to have a team of people [and] you have to trust them … and that’s what NEXT is doing. That’s what we did in business. If you don’t do that, you cannot grow. So it’s no different from normal business practice, but there has to be trust.”

That trust extended to the people leading and working on the various projects NEXT supports. By focusing on innovation and the root causes of problems, the Foundation could empower and enable those already working at the coalface of any given challenge. “A lot of what we are doing is not path finding,” says Chris, “it’s just picking up ideas from others and applying it.”

The framework was clear from the inception: invest in a tenyear, $100 million spend-down programme “for the benefit of future generations of New Zealanders”, and focus on high-impact projects in education and the environment, the two areas closest to the hearts of Neal and Annette. By doing it this way the Plowmans believed they would achieve the greatest return on investment.

“Neal really wanted that,” says Chris. “He felt you achieve the best results by having a fixed term. You just get in, make a difference and move on.”

Ultimately, of course, it’s the difference that is made that counts most. By confining the Foundation’s work to a few chosen areas of focus within education and the environment it has been able to avoid the dissipation of energy and resource that can be a risk for less focused organisations.

Given both Neal and Annette cared about New Zealand’s environment, and that Annette had formerly been a teacher, these were logical areas to concentrate on. Furthermore, they are both areas with significant, tangible challenges that demand real scale in terms of ambition and investment.

“Two focus areas felt manageable and right,” says Chris. “We had a theory of change. We said if the money is well spent and we focus on specific areas, and use the expertise of the management and trustees well, and bring people together, we can have vastly more impact than with dollars alone.”

Half way through the life of the Foundation, that theory has been put into practice. The last word should go to Annette, and her closing remarks from the 2018 Kea World Class New Zealand Awards evening. “NEXT is supporting positive change for our two greatest assets – our land and our people,” she said. “It’s what is important to us – to build a better New Zealand for the country and the people we love.”