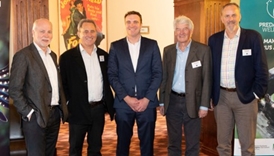 Predator Free Wellington’s vision to be the first capital city in the world to be Predator Free got a boost this week – to the tune of $3.2million. Predator Free NZ 2050 Ltd announced the financial support to the initiative founded two years ago by NEXT, the Wellington City Council and the Greater Wellington Regional Council.

Speaking at the funding announcement event, Ed Chignell, CEO Predator Free 2050 Limited said he would love for Wellingtonians to have a city free of possums, rats and stoats where birds like kākā, kārearea, kererū – and ultimately kiwi – can flourish.

“This is not a pipedream, the $3.275 million of funding Predator Free Wellington and Capital Kiwi jointly receive over the five years means the world’s first predator free Capital is within reach,” Mr Chignell said.

Predator Free Wellington and Capital Kiwi are the charitable entities behind this bold vision. Ed Chignell said they are just the third regional project to receive funding.

Chris Laidlaw, Chair, Greater Wellington Regional Council said: “We’ve already proven we can do this, we eradicated possums from the Miramar peninsula in 2006. This additional funding from Predator Free 2050 Limited allows us to take the next big step and prove we can scale up predator eradication across the whole of Wellington.

“Miramar Peninsula will be the first area to really target full scale predator eradication. Backyard trapping is the first hit, helping to get the numbers down. Next year we’ll rollout intensive operations, which will take a real bite out of predator numbers and put us in a much better position to achieve our ultimate goal of eradication,” Cr Laidlaw said.

“From there we spread the success formula into Island Bay and the city, and in successive waves north to Porirua” said Cr Laidlaw.
Strategic philanthropic foundation, NEXT sees this project as a blueprint for other New Zealand cities. Bill Kermode, CEO, NEXT Foundation said we know these plans are ambitious but we need big goals, big vision to make big change.

“What is remarkable about Predator Free Wellington is not just the scale of what is being proposed, but the fact that the project is centred in a major city where people work, live and play every day. Wellington is leading the way with urban predator eradication,” said Mr Kermode.

Wellington Mayor, Justin Lester said the Wellington people have strongly indicated, through the long-term plan process, they want a predator-free Wellington
“This project represents an unprecedented conservation movement in the wider Wellington region, spanning community, government agencies, philanthropists, public and private stakeholders,” said Mayor Lester.
“It is a movement that has been growing for 20 plus years, thanks to the platform provided by Wellington’s pioneering trappers.

“Wellingtonians want to see this happen, we have thousands of households already involved, across 43 of Wellington’s 57 suburbs, backed up by more than 120 community groups.
“A predator-free Wellington will support the continued flourishing of other native species now present in Wellington City, including kākā, tieke, kārearea, kākāriki and little penguin.
“It will also allow for the translocation of kiwi to Wellington and other locally extinct species into the predator free environment,” said Mayor Lester.

Predator Free Wellington and Capital Kiwi are one of the first projects supported by Predator Free 2050 Limited, a 100% government-owned charitable company. This partnership will help supercharge the eradication efforts and support the longer term outcomes for Wellington residents to embrace the change and help the city reach its nature restoration goals.